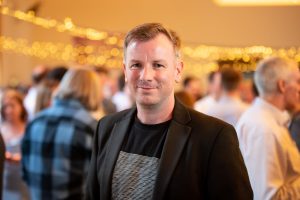 My first week at FCH was spent measuring window reveals on a rainy former airfield, an immediate departure from my university life that ended just a couple of weeks earlier. That first project was the refurbishment of a stunning collection of Grade II listed Art Deco airport buildings. You may know them because it was to here that The Beatles returned triumphant from their breakthrough American Tour. The buildings were converted to a Hotel, David Lloyd Leisure Centre and Call Centre, in the terminal building and hangers respectively, by our then client Neptune Developments, now re-named as ION Developments. It is incredibly satisfying reflecting on the fact that the buildings still retain their original tenants from 1999 and that the entire area was ultimately transformed on the back of this regeneration.

The second project and another great ION success was the new precinct around Liverpool’s Metropolitan Cathedral. It spoke volumes about our team that we were entrusted to deliver such a sensitive project, which needed to knit seamlessly into the fabric of what was subsequently voted Britain’s favourite street. No pressure! Walk up that dramatic flight of steps to the cathedral’s ceremonial doors from Hope Street and you’ll see the design’s enduring quality.

The project is tinged with some sadness however, as one of FCH’s founders, Phil Chester, tragically passed away during the early stages of its inception. His influence carried through the design, though, and I’d like to think a little of his brilliant, warm spirit lives on in that part of the city.

Our first major success in London also drew on our instinct for good public realm.  We were asked to take a fresh look at the Putney Plaza development, and it was what we did with the spaces around this elegant residential block, as much as how we maximised space and utility within the building itself, that helped define its success.  It demonstrated our ability to play to London’s rules and budgets and set us on course for the growth we’ve since enjoyed in the capital.

The quality of communal spaces, both internal and external, have taken greater prominence in recent years, highlighted in one of our key sectors, student accommodation. Our designs for Horizon Heights next door to Liverpool’s mainline rail terminus, moved the whole sector forward on the national stage, showing how well-designed social spaces could hugely improve the appeal of purpose-built student accommodation.

The idea of wellness was coming to the fore and alongside our client Unite Students, we led the way in thinking through how this can work practically and effectively, to support young people embarking on the next phase of their life away from home. We benefitted from a generous budget to deliver what remains a pathfinder building for the PLC, with exemplar entrance lobby, social hubs, sky lounges, support services and a variety of study areas. Added to that, the views from the upper floors of this twenty five storey building are stunning!

Whilst Horizon Heights was designed to make a statement with its scale, east in Manchester our role at Tribeca House was to ensure the building blended in sensitively to its setting – although not without allowing us room for contemporary design flourishes that have been met with universal approval.  Fire-damaged and with part of its façade lost, we’ve blended existing and new into the fabric of the street. Its success as an office building bears testimony to our execution and the quality of the developer’s vision. As with Putney Plaza, so this scheme helped underpin our emerging reputation in a new office location and we’ve gone on to develop and enjoy strong relationships with the key civic authorities in and around the north’s leading commercial powerhouse.

The final sector to mention, and one for which we are well known nationally, is the hotel sector. I take great pride from a brace of our most recent projects in London, not just because of their quality or even their scale, but because in this citadel of cutting edge hotel design we have been entrusted with two of the capital’s most talked-about projects.

Alongside our client The Other House we recently completed their first Residents’ Club in South Kensington, whilst we are leading the team delivering its sister Residents’ Club in Covent Garden. This unique brand has taken the London market by storm and showcases our skills at manipulating existing structures to carve out surprising spaces and introduce light. While we have in the region of 9,000 hotel beds across the UK complete or in progress, of all of them The Other House stands out as something really special and I’d recommend a stay if you’re in the capital!

My role at FCH may have changed since those first projects but I still enjoy being hands on and I think it’s the close relationship that I and my fellow directors have with projects that separates us from many of our peers. None of the above projects (and hundreds more beside) can be done without our brilliant staff, many of whom are still with us from those early days. As much as anything I hope that they will read this blog and are similarly proud of what we have achieved, genuinely transforming cities around the UK for the better.